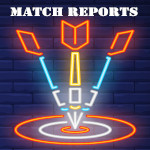 Warwickshire suffered their second consecutive defeat at the weekend when taking on table topping Lancashire in Wigan.

Ladies B took a decent 3-3 draw but coulld have been better had doubles gone our way, winners being Angela Jones, Kat Spanswick and a LOM from Wendy Adams.

Mens B were up against a side that had won all their games so far, but the bears had also had a great start this season, end result was a 7-5 defeat for the Bears with wins coming from Gareth Braham, Dave Hill, Tom Martin, Rob Comben and a MOM from recalled Jamie Atkins who looked like he had never been away from the stage.

Ladies A were on the wrong end of a 5-1 loss, with only Natalie Gilbert taking a LOM victory with a fine 21 average.

Mens A looked on paper to be a cracker and so it proved, with a great 7-5 win for the Bears with wins from Steve Giddings, Charlie Symons, Kevin Dowling, Nigel Heydon, Ted Evetts, Noel Grant and a super MOM from Ian McFarlane 30.52.

The Weekend overall saw a 20-16 defeat but a defeat that could have been a victory. There was an incredible 43 maximum scores of 180 over the weekend which is some sort of record within the BICC.

Bears move on to the next game with a home fixture against Essex.