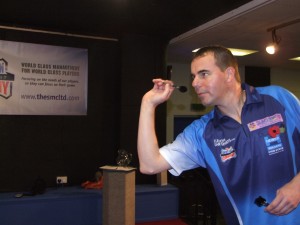 Simon Power proved his name to be the theme as he powered his way through to the Lakeside International Qualifiers to be held later in the year. Always a tough event as a good field of 32 players fought for the place. Simon had defeated Lee Martin, Jamie Atkins, Dean Sanders before meeting Noel Grant in the semi finals where it went to the wire. Other half of the draw saw Ian McFarlane through after battling wins over Mark Ashton, Mark Strong, Ted Evetts and then a 3-2 decider in the Semi Final over Antony Allen who earlier had embarked on a 9 dart attempt after a 177 and 180.